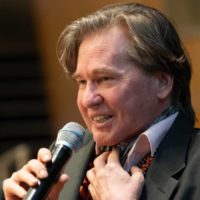 Amazon Prime Video shared a trailer for the new documentary ‘Val,” featuring actor Val Kilmer. You can take a look at the trailer – here.

In the preview, Kilmer, 61, reflect on his “magical life” and career.  The documentary features Kilmer’s home movies from throughout the decades, including footage from the sets of Top Gun and Batman Forever. In addition, Val features narration from Kilmer’s son, Jack Kilmer, and new interviews with Kilmer himself, who confirmed in 2017 that he was “healing” from a battle with throat cancer.

Directed and produced by Ting Poo and Leo Scott, the filmmakers said in a statement: “Val is a very complex and brilliant man with so many layers. And we wanted to try to get that feeling of him into the film, from his spirituality to a great sense of humor.”

Val will open in select theaters July 23 before it starts streaming Aug. 6 on Amazon Prime Video.