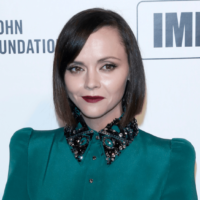 41-year-old actress Christina Ricci married hair stylist Mark Hampton at a wedding in Los Angeles over the weekend. Ricci shared the news on Instagram alongside a photo of herself and Hampton standing in front of a display of flowers along with the caption: “Mr. and Mrs.”  Hampton posted the same photo on his own account, writing,”#justmarried.”  Ricci later shared another photo of herself and Hampton, writing, “Also Mr. and Mrs.”

The marriage comes just two months after Ricci announced she is expecting her second child, her first with Hampton. Back in August, she wrote on social media, alongside a picture of a sonogram: “Life keeps getting better @markhamptonhair” Ricci shares her 7-year-old son, Freddie, with her ex-husband, James Heerdegen. Ricci filed for divorce from Heerdegen in July 2020, amid allegations of physical and emotional abuse.