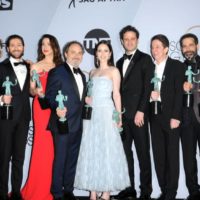 Amazon Prime Video announced that ‘The Marvelous Mrs. Maisel’ will return for a fourth season in February 2022, and shared a release date (Feb. 18th) as well as a teaser for the season. Amazon also shared a poster for Season 4 on social media with the tagline “We’re just getting started.”

The Marvelous Mrs. Maisel follows Miriam “Midge” Maisel (Rachel Brosnahan), a housewife who decides to pursue stand-up comedy in the late 1950s. Season 4 takes place in 1960, and an official description reads: “Looking to hone her act, Midge finds a gig with total creative freedom. But her commitment to her craft — and the places it takes her — creates a rift between her and the family and friends around her.”