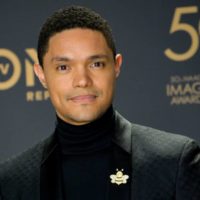 The Recording Academy and CBS announced that The Daily Show host Trevor Noah will host the 2022 Grammy Awards on Jan. 31, 2021 in Los Angeles.  Noah, 37, previously hosted the 63rd Grammy Awards, which took place in March.

Recording Academy CEO Harvey Mason Jr., said in a statement: “Trevor was amazing as our host for the 63rd Grammy Awards with praise from the music community, music fans and critics. We’re so excited to welcome Trevor back to the Grammys stage and feel fortunate to once again have him hosting what we believe will be an unforgettable evening.”

The Grammys will air live Jan. 31 at 8 p.m. EST on CBS. It will also be available to stream live and on demand on Paramount+.